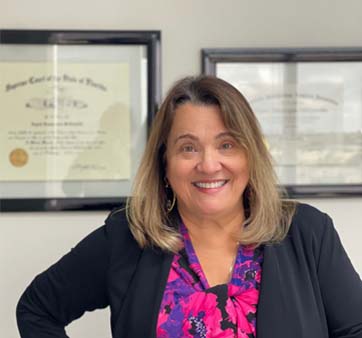 Ingrid Domingues-McConville founded Domingues McConville, P.A. in 1995. She is a member of the Florida Bar since 1995 and a member of the United States District Court, Southern District of Florida. Ingrid obtained her undergraduate degree in Psychology from the University of Miami in Coral Gables, Florida and her law degree from Cleveland-Marshall College of Law in Cleveland, Ohio. A native of Rio de Janeiro, Ingrid is fluent in English, Portuguese, Spanish and has sufficient knowledge of French, Croatian and Italian. She has served as a City Prosecutor for the City of Cooper City, Florida and has worked in academia as well as in International Banking.

Ingrid enjoys a significant leadership role in the Brazilian community in South Florida and throughout the United States, providing much needed legal guidance and advice. Ingrid has been serving on the Florida Bar’s Unlicensed of Law Committee in Broward County for many years. She belongs to many legal organizations including, the American Immigration Lawyers Association (AILA) and the Broward County Women Lawyers’ Association. Her columns, radio show and articles in various publications throughout the United States, has kept her readers and listeners informed for over 26 years. Ingrid also authors articles for numerous other publications and has co-authored the Miami Brazilian Consulate’s publication, “A Guide to Doing Business in Florida”. Ingrid has been interviewed by local and international media and is frequently contacted to offer her views on Immigration related matters. She is frequently invited to hold Immigration lectures throughout Brazil and Florida.